It’s funny because some people who slag off my book on the internet complain that the main character  goes on and on about food.

Well, like yes.  It says it’s a book about food on the cover.

However if you are a person who does enjoy food, here are some pictures of things I have recently eaten, mostly in Italy – including some vegetables: 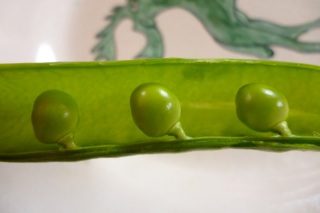 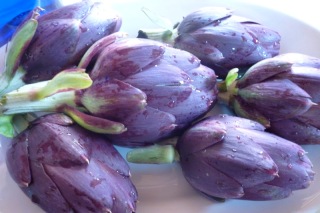 An 8.5 out of 10 millefeuille – not quite enough layers for my liking but yummy nonetheless:

Ah.  This is where I started using an iPhone to take photos and the food looks quite anaemic.  Oh well.  Trust me, it ate in technicolour.
This, however, was probably the best thing I’ve eaten since the bacon pastry.  Gutted it looks so wishy-washy in this picture…

and also in this one: 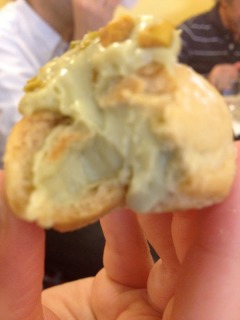 Even en masse you can’t really appreciate the awesome-ness.. 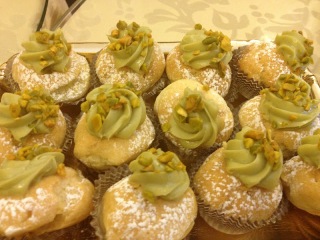 Let’s just say that after I ate one of these bad boys,  I ordered 12 on the spot.  Ok: it was small; a miniature profiterole stuffed with the most dense, lush, heavy, thick, creamy pistachio custard, and topped with pistachio cream and pistachios.  And believe me when I say that I can normally turn my back on a pistachio, if necessary.  It’s not like they’re cashews.  And profiteroles / pro-shmitteroles – you know I’m all about the brownies.

There was just something stupidly magical about the combination / size / texture / weight / density of the cream, that stopped me in my tracks.  I would even go so far as to say that I would plan an entire week’s holiday around this one bakery in Locri, in Calabria.  Of course I have forgotten the name of it but if anyone is going anywhere near Calabria, twitter me or whatever, and I’ll ask my friend to remember the name for you.

Finally I shall leave you with one very British treat that I didn’t get round to posting last month – this blue Battenburg that I ate at the Chelsea Flower Show, la di da.

Cannot believe I’d never been to Sicily until last Tuesday.  Am sure my ancestors were Sicilian – how else to explain the fact that everything I love is Sicilian.

Spaghetti all day every day – this one with pistachio and prawns, at Da Vittorio, which is apparently Giorgio Locatelli’s favourite restaurant. 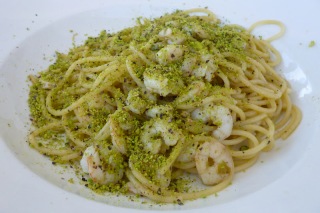 Awesome ice cream, and even granita (which I normally can take or leave, but how can you leave something that looks this good?)

Salt!  And look how nicely they make it… 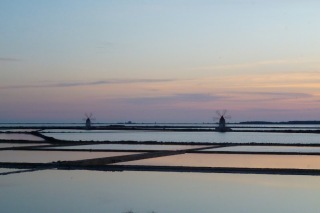 Plus they stuff ice cream in to a brioche!! Seriously, I am ALL OVER that.

and pears covered in custard, lots of custard generally.  At my hotel they even served breakfast croissants with a jug of chocolate sauce and a jug of custard.  Happiness.

And finally, insanely good looking men.  (No photos sadly, but half of them made David Gandy look like David Mellor.)

If anyone out there has a villa / house / small flat, and would like me to house-sit for them for a year or so, just say the word…